It was a dark night in an Eastern European shtetl. Shabbat was just about to come in. The Baal Shem Tov sat at the dinner table, surrounded by friends and family. Every spare inch of space had somebody sitting in it. The Baal Shem Tov was not a rich man, although many of the acolytes of the movement he founded later would be, and he would have to make a thin chicken soup stretch to feed everyone. Suddenly, there was a knock at the door. Standing in the doorway was a vagabond. He smelt bad, his beard was unkempt, his clothes were untidy. He asked: “can I come in? Can I eat?” The Baal Shem Tov looked back at the full house, looked over at the steaming pot of thin chicken soup, looked back to the man, then up to Heaven and said: “If God has made enough room for him on this planet, then surely I have enough a room at my table.”

The Baal Shem Tov was a model of hospitality. In this week’s parshah, we read about Abraham, who was, too, a model of hospitality. Two strangers come to approach Abraham, and he cannot do enough for them. The Torah is usually noticeably scarce on detail, but on this occasion, we hear everything he did. He bowed, he welcomed them, he gave them water and bread-cakes, he washed their feet, he offered them shade. He even killed a calf for them, and in those days meat was far more expensive than it is today.

Abraham doesn’t even know who these people are yet. As it turns out, they are messengers of God. But they could have been anyone. Nevertheless, from the outset Abraham addresses them as if they are angels. Perhaps it was that Abraham could sense something in them. Perhaps he had been expecting God. But I think, most likely, Abraham simply saw the face of God in everyone.

Rashi tells us that Abraham always used to sit at the entrance to his house, so that he could invite anybody in who walked past. The midrash tells us that Sarah always had a listening ear. She was known everywhere for how tirelessly she worked to cultivate a garden for visitors to sit. Their tent was open on all sides, so that they could welcome people coming from every direction. And from this story, the rabbis derive a mitzvah, perhaps the most important commandment of all: the duty to be hospitable.

The next story in Genesis is a parallel. Two angels turn up in Sodom. Lot invites them to stay the night. Before they had gone to bed, all the men from every part of the city of Sodom—both young and old—surround the house. They threaten to assault their visitors. When Lot objects, they deride him for being a foreigner and try to break down the door. Lot offers his daughters up to the baying mob.

Although there is a modern Christian interpretation that the story of Sodom is in some way about homosexuality, the rabbis did not have such a tradition.  For them, this was a story about hospitality denied. This, they said, was a city so wicked that they would not even allow their residents to show any hospitality or compassion to strangers. This, they said, was a city where even neighbours were not kind to each other; where a dog-eat-dog ideology took root so that nobody worked together. This was a city so wicked that even people like Lot, who should have been righteous, ended up turning against their own daughters and denying them the childhood they deserved. That is why the angels destroyed Sodom.

Which city do we live in? Which house do we inhabit? I often wonder what the two angels would make of our neighbourhoods and homes if they came to visit. While we have more technology and medicine and infrastructure than the prophets and tsaddikim could ever have anticipated, we have just as many people in need of hospitality. Our society seems more isolated than ever.

Manchester is known for its hospitality, but even here we can see the isolation. We already know older people who live in loneliness. We already know younger people who are desperately reaching out for a community, only to find nothing. We have seen newcomers turn up in this city only to encounter racism, hostility and closed doors. We have all seen the number of rough sleepers on our streets rocket over recent years.

In that situation, we have the same choice that was facing Lot and Abraham. Will we throw open our doors to let people in, or will we take the cruelty we experience in society and turn it on the people in our own homes? Will we increase the love or increase the isolation? This is a societal problem, but it will only change if people welcome each other, get to know each other and build solidarity with each other.

So, we must start with ourselves and our own homes. Jewish life is not something that happens in the synagogue. The synagogue is just a place we come to get respite and reenergised as we live a Jewish life. Jewish life happens in what we do the rest of the time. If we spend the rest of our week building communities, showing hospitality and modelling loving-compassion, that is when we’re living Jewish lives. Hospitality is one of the most important mitzvahs because it affects how we interact with everything. Being welcoming to people helps to break down isolation. It helps to create a sense of community. And it makes better, kinder people of ourselves.

Let’s all make the effort to be better hosts and to give more time to each other. Choose to be like Abraham and Sarah. Choose to be like the Baal Shem Tov. As Jews, let’s be the people who decide not to let an isolating and inhospitable society last. The struggle for community begins here, with us. 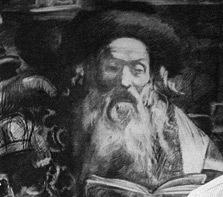