I’ve always seen this joke as quite a compliment to our inclusivity, so respond: “only one wife? How very conservative. In this day and age, she could have another husband. And he could be pregnant too.”

Yes, it is true that we treat relationships very differently across the Jewish denominations. Although some strands of Judaism are beginning to catch up, there are also those who prefer to hold onto the biblical view of marriage.

In this week’s parashah, we get to see some of what that biblical view of marriage looked like. It begins by telling us what should happen if a wife has an affair and her husband doesn’t know about it.[1] It is hard for a modern reader not to notice the lack of gender parity in this parashah. Only women can cheat. Men can marry as many women as they like (Solomon had 700 wives).[2] They can have concubines (Gideon had more than he could count).[3] They also had the right to sex with their wives’ servants (as Jacob did with Rachel’s maidservant Bilhah and Leah’s maidservant Zilpah.)[4]

Then, even with all these different categories of kosher relationships a biblical man can have, there seem to be very few stipulations on what should happen if he has sex outside of these expansive confines. Women, on the other hand, are lumbered with the same man to whom their father sold them when they were 12. For the rest of their lives.

That is not even the most challenging part of this parashah. Naso then goes on to tell us what should happen if the husband is gripped by a fit of jealousy even if his wife has done nothing wrong.[5] Now, I am an avid reader of glossy magazines and newspaper supplements, so this situation seems quite familiar. I tried to read the parashah as if it is a letter to an Agony Aunt.

A woman’s husband has flown into a fit of uncontrollable jealousy, despite her having remained faithful. With my Agony Aunt hat on, I think about how best to counsel this situation. Yes, jealousy is a natural emotion, and can even be a healthy one. You can talk through what has caused these feelings, and perhaps see a couples therapist, so that he can work through his issues.

The Torah takes a different approach. It instructs that the woman be taken before a priest to perform a magic ritual. Her husband will bring flour and the priest will bring mud from the Temple floor. They’ll then mix it up in water as the priest recites magic incantations over it. The woman will drink it. If she’s fine, she didn’t cheat. If her belly sags, she’s a cheater.[6] The whole thing sounds like a medieval witch trial. The ritual ends with a postscript that really makes for the icing on the cake: whatever the man does, he is free from guilt. Only the woman can incur guilt.[7]

It goes without saying that progressive Jews do not share the biblical view of marriage. In Liberal Judaism, especially, we are the only Jewish community in Britain that has complete gender equality when it comes to divorce. In Orthodox Judaism, divorce is one-directional. A man drops a document into the hand of his spouse, announcing their separation. In Liberal Judaism, thankfully, we have no such thing.

We strive for equality in marriage, too. Our ketubot – our documents of marriage – were rewritten decades ago so that the text would not just have a man taking a woman as a wife, but both partners take each other as equal man and wife. These documents carried over nicely when we began performing same-sex weddings. In the last couple of years, the beit din has updated the ketubot further so that we now have gender-neutral marriage certificates in Hebrew, reflecting the real relationships our congregants have.

Talking about this and contrasting it with other institutions’ approaches to relationships is what fills me with pride for my movement. Yet I wonder if we still have further to go. The discourse about monogamy, jealousy, shame and control in this parashah has made me think again about different models of relationships.

Marriage is a wonderful thing. I am so glad that we can share it with couples in committed relationships, regardless of their genders. At present, however, we restrict marriages to monogamous relationships. Of course, none of us want to return to a time where men could do as they pleased and women were confined, but I am learning from my peers that this is not the only way relationships are conducted. We do not have to choose simply between monogamy and oppressive male control.

Increasingly, I meet people who are in polyamorous relationships. They take the approach that they do not need to have just one partner for the rest of their lives, but that they can build multiple meaningful connections. Cheating, for them, is not about whether a partner has a relationship with somebody else, but about whether they are dishonest and secretive. Their approach takes the emphasis away from acts and onto attitudes. It makes the ideal relationship about how honest and open communication is. I can’t help but feel that if the couple in our parashah had this, rather than a priest performing magic, they might have had a healthier relationship.

I don’t think that style of relationship is for me, but it is for some people. Liberal Judaism should be able to deal with it. The future of marriage in our synagogues may well involve multiple-partner ceremonies. It may involve renewing discussions about what fidelity, jealousy and honesty look like in relationships. Such conversations could benefit all couples.

I would love to be able to turn to the Orthodox who make fun of our approach to relationships, and say without irony or humour, that we have a woman rabbi who has a wife and a husband and all of them are pregnant. And that we celebrate all their lives. 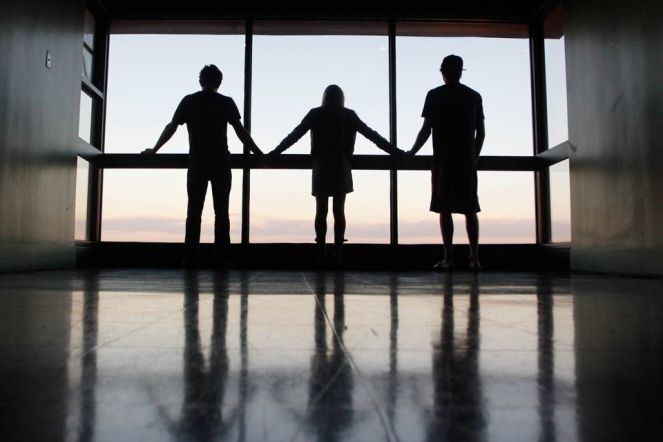 I delivered this sermon on Friday 7th June at Manchester Liberal Jewish Community for Parashat Naso.