The advent of Eurovision on Saturday reminded me of another anniversary I needed to mark. A year ago, at this time, many of us assembled in Parliament Square to publicly grieve the killing of Palestinians at the Gaza border. At the time, I wrote this sermon. While I shared it with friends and colleagues, the climate felt far too hostile to publish this. Perhaps I should have done. A year on, here is the sermon I never delivered at the time.

We tell ourselves that the grave levels all distinctions. Kittels don’t have pockets. You can’t take any of it with you when you’re gone. In death, all are equal.

Anybody who has ever lost somebody knows that is untrue. The grave shines a light on differences that we could otherwise ignore. As we scramble together the funds for a funeral, often several months’ wages, we realise how much class mattered in life. The poorest families cannot even attend the funerals of their loved ones, as councils bar them while they dispose of the body. People find out how much they were worth in round figures.

Grieving rituals reflect strongly on a person’s life. At the graveside, you can see what a dead person valued, and what people valued about them. You find out how many people their lives touched, and how much. Even early in our roles as rabbinic students, my classmates and I have begun to see what a profound impact a person’s death can have on the people who loved them. You find out what value gets placed on a life.

Jewish mourning rituals help us to make sense of such loss. The kaddish prayer is a blessing for the living; an Aramaic chant in praise of the Almighty; an appeal to Whoever is Up There to intervene and give us peace in every sense of the word. Conducting Yizkor services at Yom Kippur, I have seen how just the fact of reciting those words once a year can alleviate pain and bring healing. Its rhythm has its own power.

But the rules around these rituals can hurt as well as heal. Judith Hauptman, a Talmud scholar, has recorded how the limits on who can be mourned have narrowed over time in Orthodox halachah. A shorter version began as a blessing for any learning experience. From there, it became a graveside prayer one could say for all family members and teachers. Over time, it has been slowly whittled down to include only a mourners’ own parents. Hauptman points out that this system poses a problem in the modern world, where parents regularly re-marry and families are often cobbled together in ways that don’t match up with normative expectations.

I feel like limiting who can be ritually mourned poses a much deeper, existential question: what makes a life worth grieving? How do we decide what makes a death worth commemorating? What does it say about the value we place on somebody’s life when they were living, if we can’t remember them when they die?

In the aftermath of the Nazi genocide, Liberal Jews began saying kaddish weekly, independent of who was in the synagogue. There were too many people left behind who had nobody to mourn for them. There was too much unspeakable suffering to moderate who could be mourned and how much. It was a way to affirm the dignity of Jewish life against a racist movement who sought to wipe it out completely.

That was how I was raised: reciting a blessing every week for members of my family I never knew, and people I’d never met, to sanctify their memories lest they should be forgotten. We prayed, too, for earthquake victims, people dying in famines, those killed in school shootings and terrorist attacks. Whenever there were people whose names needed to be remembered, we remembered them.

Perhaps, my more conservative friends suggest, that ritual expands the bounds of mourning too far. I do not know what it is like to grieve for a parent. I haven’t had that experience. I don’t know how it compares to the loss you feel when you lose a friend, or another family member. I only know what it is like to have somebody die and wonder whether I can grieve for them, and how much I’m allowed to do it.

I know that feeling too well. The gay community is famous for its statistics. Alcohol, drugs, suicide, homelessness, murder, depression, loneliness. I have had friends die and wondered whether I could pray for them. And wondered what I could pray for them. In that moment, I have found out the uncertain value that I myself place on a life. We cannot mourn everyone equally, but we surely can mourn. Somehow. The kaddish is the only vocabulary I have for sanctifying death, so I have said kaddish for people who were not my parents; who were not Jews; who I did not know.

That is the question of deep religious significance behind the conflict in the Jewish community over the recitation of kaddish for those the IDF killed in Gaza last month. Everybody has their own views on who is responsible for violence in the Middle East and how it can be resolved. To the best of my knowledge, nobody has changed their mind significantly on that front. My views on the matter are well-known, and I won’t go into them here. But I do want to talk about the halachic and spiritual concerns that this issue has raised.

I want to affirm, without reservation, that I believe we were right to say kaddish for the Palestinians. Reciting that prayer said something that no other kind of protest or placard or petition could. It said that the souls of those killed were worth grieving. It said that their lives were worth living. In a world beset by war and injustice, that prayer, for those people, at that time, reminded the whole world of the existence of a loving Creator, Whose ways are peace.

They were not the parents of anyone present there. Nobody davening in Parliament Square knew any of the Palestinians who were killed. In a sense, that might make the prayer inappropriate. But only if you accept that we can only grieve for the people who gave birth to us. If that is your position, I respect it, but I don’t agree with it. I think we are right to mourn people with the only religious language we have when we are moved to do so.

None of the people killed in Gaza were Jews. Like most Palestinians living in that area, most of those who died were Muslims. There are some who claim that kaddish should be a prayer reserved only for Jews. If that is your position, I cannot even respect it. Kaddish does not make any religious claims about the status of the person being mourned. It does not have any impact on their metaphysical state. It is a prayer for the living, to help them cope with the trauma of death. If we limit that prayer only to other Jews, we limit ourselves and our capacity to care for others. We send out the horrifying message that only ‘our own’ deserve to be remembered. We suggest that only ‘our own’ led lives worth living.

Perhaps they were members of Hamas. It is, after all, the largest political organisation in Gaza, acting both as an armed militia against Israel and as the primary provider of welfare services to Palestinians. It is a reactionary, fundamentalist, sexist and homophobic party. It is not a group I would ever support or join. But even its members led lives worth living. They had deaths worth mourning. They were created in the image of the Holy One, Whose will brought the Heavens and the Earth into being. No amount of political disagreement can detract from that.

Hamas’s views on Jews are unconscionable. If they ruled the world with the views they hold now, the lives of all Jews would be a misery. But they do not rule the world. They barely have control over a small strip of land, locked in by Egypt and Israel as a military buffer zone. They do not have any control over their neighbouring Mediterranean Sea, where Israel, Cyprus and Turkey police what goes in and out. Even how much food and aid enters the land is rationed by the United Nations. Their skies are not their own. However horrid their ideology, they have no power to enact it. They are, by far, the weaker party.

Perhaps the very fact of how vulnerable they are makes them less worthy of being mourned. In Frames of War, Jewish academic Judith Butler writes about what makes life grievable. She looks at how a media culture that showcases war as a daily occurrence has desensitised people to its unimaginable suffering. She shows that the people whose lives are most precarious – that is, those who we already don’t expect to live very long – are treated as if they are most disposable. Their lives are hardest to completely mourn.

Intuitively, we know this is true. We are so used to hearing about people there dying, or so accustomed to the idea that war is normal in ‘places like that’ that they don’t induce international horror any more. But they should. If we were fully human, living up to the highest values taught in our Torah, we would live in a permanent state of distress. But we don’t, because we have to survive. We treat precarious lives as if they are disposable.

Critics of the kaddish for Gaza have pointed out that the protesters didn’t pray for people killed in Syria, Congo, Central African Republic or Yemen that week. We didn’t. We should. If they are criticising the protesters for not grieving enough, I extend a wholehearted invitation to cry with me about the state of our broken world. There are too many tragedies left ignored. But they want people to hurt less, or not at all, how can we possibly accept? How can anyone agree not to feel rage and sadness at unjust killing and remain human? And call themselves Jewish?

Despite all desensitisation, when Israel gunned down the Land Day protesters in Gaza, suddenly we could not ignore it any more. Only the day before, Netta had won Eurovision. President Trump was in Jerusalem, opening an embassy. All eyes were on Israel. And Israel shot 63 people in one day. Israel, that declares itself the Jewish state, a body politic that has taken up the mantle of our sacred task on earth to be a light unto the nation and spread the message of ethical monotheism, shot down 63 people in one day. They sent out one message about what value they placed on certain lives. The Jews in Parliament Square sent out an alternative message.

By making the decision to pray for the Palestinians, the people in Parliament Square did the most Jewish thing we could. We sanctified life in the name of the Holy One. We recognised that the bonds of faith that bind together humanity are stronger than the bonds of blood that bind together one people. With our words, we gave each other hope for a redeemed world, saying:

“May the Almighty’s Sovereignty be established in your lifetime and during your days, and within the life of the entire Jewish people, speedily and soon.”

And let us say: Amen. 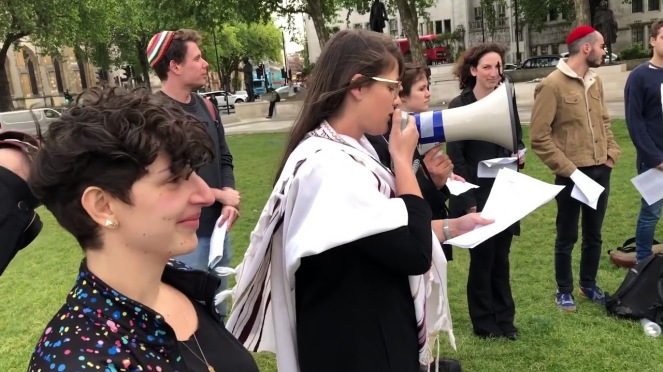 The fallout from this action can still be felt, and many in the community are hurting. I hope that publishing this does not reignite flames but helps demonstrate that we were coming from a place of heartfelt Jewish religious feeling, even for those who disagree.